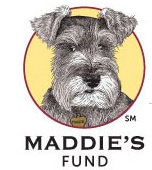 Maddie was a beloved Miniature Schnauzer whose unconditional love, devotion, loyalty and spirit inspired her guardians to start a charitable foundation, Maddie’s Fund, in her name.

Dave and Cheryl Duffield fell in love with Maddie when she was only ten days old. “We held her in our arms, and loved her immediately,” says Dave. Over the course of their ten years together, Dave remembers one special day.  Playing with Maddie, he picked her up and made the following promise: “If we ever make some money, I promise we will give it back to you and your kind so others can be as happy as we are today.”

Dave and Cheryl are fulfilling their promise to Maddie. The Duffields don’t want to make a big fuss over their personal contribution, but they do want to honor their beloved dog and the special bond they shared with her.

Maddie’s Fund® (www.maddiesfund.org) is a family foundation endowed by the founder of Workday® and PeopleSoft, Dave Duffield and his wife, Cheryl.  Maddie’s Fund is helping to achieve and sustain a no-kill nation by providing solutions to the most challenging issues facing the animal welfare community through Maddie’s® Grant Giving and Maddie’s InstituteSM. Maddie’s Fund is named after the family’s beloved Miniature Schnauzer who passed away in 1997.

Contra Costa Humane Society would like to extend our sincerest appreciation to Maddie’s Fund for the assistance they provide us in saving homeless dogs and cats in our county! #ThanksToMaddie

Donations: Please email Katrina at kdaw@cchumane.org to coordinate a drop off time.

Our office is open by appointment only.

Kitty Corner is currently open by adoption appointment only. No Walk-Ins.